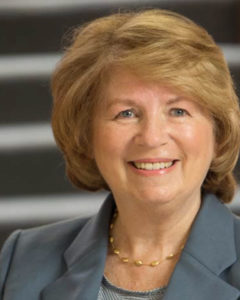 Bertha K Madras, PhD, Professor of Psychobiology at Harvard Medical School (35 years), is based at McLean Hospital and cross-appointed at the Massachusetts General Hospital. She directs the Laboratory of Addiction Neurobiology at McLean Hospital. Her experiences in neuroscience research, drug addiction, education, government and public service offer a unique perspective at the intersection of science and public policy.

Her research focuses on neurobiology, pharmacology, brain imaging, drug discovery for addiction, neuropsychiatric disorders, and drug policy. She is author of more than 200 scientific manuscripts, articles, book chapters and co-editor of books: “The Cell Biology of Addiction”; “Effects of Drug Abuse on the Human Nervous System”; “Imaging of the Human Brain in Health and Disease”.

She is a recipient of 19 U.S. and 27 international issued patents with collaborators.

She served as Deputy Director for Demand Reduction in the White House Office of National Drug Control Policy (ONDCP), Executive Office of the President, a presidential appointment confirmed unanimously (99-0) by U.S. Senate. In a 2015 landmark Federal Court case, she served as the sole expert witness for U.S. Department of Justice in de-scheduling of marijuana. In 2017, she was appointed as one of six members of the President’s Commission on Combating Drug Addiction and the Opioid Crisis along with Govs. C. Baker (MA); C.. Christie, (NJ, ret.); R. Cooper (NC); Congress. P. Kennedy (RI, ret.); Attorney General P. Bondi (FL, ret.) She currently is a member of the National Academy of Medicine Collaborative on the Opioid Crisis.

She was sole author of a World Health Organization commissioned report, “Update of Cannabis and its Medical Use” (2015) and co-authored “The Health and Social Effects of Nonmedical Cannabis Use. Dr. Madras recently served as a panelist on Narcotics at the Vatican Pontifical Academy of Sciences.

She developed an international course on the Cell Biology of Addiction at Cold Spring Harbor Laboratories and a museum exhibit, a CD (licensed by Disney) “Changing Your Mind: Drugs in the Brain” and play, in collaboration with the Museum of Science, Boston.

She is the recipient of research and public service awards, to include a NIDA Public Service Award, CPDD Innovator Award, and a 2006 Better World Report designation of her brain imaging invention as “one of 25 technology transfer innovations (university to industry) that changed the world”.