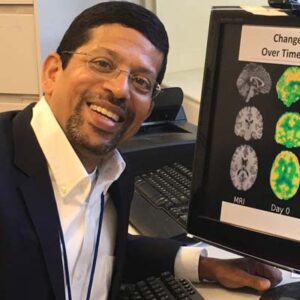 Deepak Cyril D’Souza is an active clinician, teacher and researcher. He completed medical training at St. John’s Medical College, Bangalore, India (1986), residency training in Psychiatry at SUNY Downstate (1992), and a postdoctoral fellowship at Yale (1994). He joined the faculty in the Dept. of Psychiatry at Yale University School of Medicine where he is now a Professor. He is a staff psychiatrist at VA Connecticut Healthcare System where he directs the clinical service that cares for veterans with serious mental illnesses. He directs the VA-Yale Schizophrenia Research Fellowship program which has contributed to the development of promising researchers.

He directs the Schizophrenia Neuropharmacology Research Group at Yale (SNRGY). He has used drug challenge studies to investigate the pathophysiology of psychosis, cognitive deficits, and reward processing. He has conducted phase 1-4 clinical trials in schizophrenia, depression and cannabis use disorder to develop new treatments. He also uses neuroreceptor imaging to study schizophrenia and cannabis use disorders. His research is funded by several NIH institutes, VA R&D and several foundations. He has spent ~25 years studying the acute and chronic effects of cannabinoids in humans using experimental and observational approaches and is best known for his work on the relationship between cannabinoids and psychosis. His work has been published in Lancet Psychiatry, Molecular Psychiatry, Biological Psychiatry, American Journal of Psychiatry, Neuropsychopharmacology, etc. He serves on the Physicians Advisory Board to the State of Connecticut’s Medical Marijuana Program, in addition to other panels and advisory meetings about cannabis.