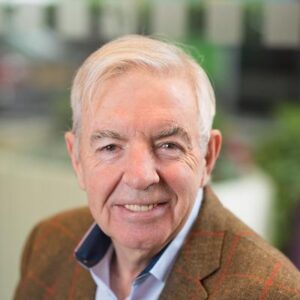 Professor Sir Robin Murray is a Professor of Psychiatric Research at the Institute of Psychiatry (IoP), King’s College London and a Fellow of the Royal Society. He is ranked as one of the most influential researchers in psychiatry by Thomson Reuters’ Science Watch and 3rd in schizophrenia research. He is one of only 5 psychiatrists ever elected as Royal Society Fellows. In 2011, he was awarded a Knighthood for services to medicine. He has won most of the major prizes in psychiatry and has been honored with awards from countries throughout the world including the USA, Germany, Finland, Italy, Brazil and Denmark. In 2005, he was chosen as one of the top role models in medicine by the British Medical Association.

Murray is the recipient of the Schizophrenia International Research Society (SIRS) Lifetime Achievement Award for 2020. His work challenged the prevailing view of schizophrenia as an adult-onset brain disease, instead demonstrating that it is in part a neurodevelopmental disorder fueled by insults to the brain during early life. He has identified that environmental and social factors are of great importance in determining susceptibility to psychosis. He found that migrants to the United Kingdom have a much greater incidence of psychosis than their counterparts back home, which appears largely due to social adversity. Robin also identified an increased risk of schizophrenia following heavy use of cannabis, particularly in adolescence, and often speaks publicly about this.

He currently researches the molecular effects of THC, the main psychotogenic ingredient of cannabis, and another component known as CBD, which appears to partly block the effects of THC; the high THC/CBD ratio in modern skunk cannabis carries more risk than traditional marijuana. Robin is now most interested in the interaction between predisposing genes and environmental factors in causing psychosis. He treats patients within the National Psychosis Unit at the South London and Maudsley NHS Trust.

Professor Sir Robin Murray graduated in medicine at University of Glasgow in 1968 and began his training in psychiatry in 1972 at the Maudsley Hospital in London. He started researching at the IoP in 1975 where he has, for the most part, remained ever since.